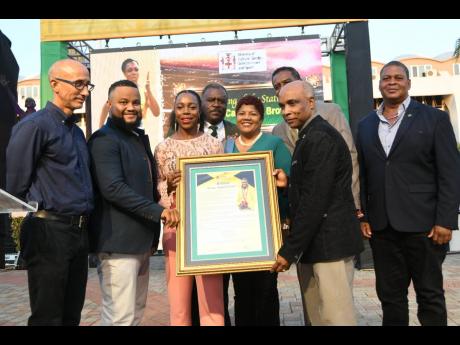 One of Jamaica’s most decorated athletes is now cast in bronze.

The statue of multiple-times Olympic and World champion Veronica Campbell-Brown was unveiled last night in a ceremony at Independence Park that celebrated her achievements, as well as acknowledging her for the legacy that she has set for future athletes.

Created by sculptor Basil Watson, the statue sees the likeness of Campbell-Brown with her arms raised in celebration and thanksgiving, capturing the similar emotions she felt as she crossed the line to win the 200m Olympic title at the Beijing Olympics in 2008.

Campbell-Brown was humbled by the honour bestowed on her and said she feels privileged to have made a lasting mark in Jamaica’s track and field history.

“To be remembered and commemorated for my contribution to Jamaica’s rich history in this unique way is an absolute ­blessing and a gesture that I greatly ­appreciate,” Campbell-Brown said in her acceptance speech.

Campbell-Brown shared in the moment with husband Omar and their daughter Avianna, who was born in late February. Although she may be too young to understand her mother’s place in Jamaica’s athletic history, Campbell-Brown hopes that she and other girls will be inspired to achieve their own goals.

“To share this moment with you and our daughter Avianna is remarkable,” she said. “I hope that my achievements will inspire her and other girls to chase their dreams and leave their own legacy.”

Campbell-Brown’s statue is situated next to another of Jamaica’s female sprinting legends, Merlene Ottey, whom Campbell-Brown has mentioned on numerous ­occasions as her idol. Her first ever Olympic medal was with Jamaica’s 4x100m relay team with Ottey anchoring the nation to silver at the Sydney Olympics in 2000 at just 18 years old. Campbell-Brown credits her success and Jamaica’s ascendancy in the sport to the standard that Ottey set.

“Merlene is such an awesome person. I really admire her,” she said. “I’m just grateful to be among Jamaica’s rich history and persons like her have set the pace for all of us who came after her. So I’m grateful to be here [statued] among these great athletes.”

Few athletes can boast of ­having a résumé like the former Vere Technical High School standout. She has earned eight Olympic medals, including back-to-back 200m gold in Athens and Beijing in 2004 and 2008, respectively. In addition, she has amassed 11 World Championships medals, including gold in the 100m event in Osaka 2007, and the 200m title in Daegu four years later.