Unbroken — an inspired documentary on an able amputee 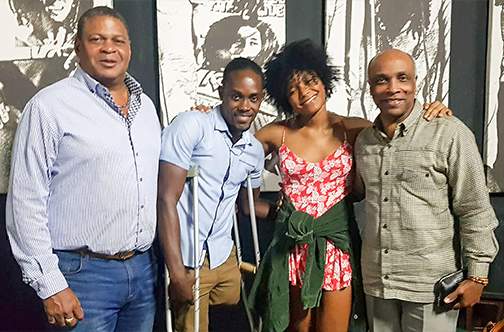 LARON Williamson is an able, above-knee amputee athlete whose appetite for life lived to its fullest is demonstrated in his insatiable love for rowing and his deep conviction that one is able if you are able.

The theatre at the iconic Bob Marley Museum provided a conscious environment for the first viewing of the documentary film of Getty images, Unbroken, a sensitive reel on Laron’s life as an amputee.

Since then the documentary has gone viral, winning an Award of Merit at the IMPACT Documentary Awards, and recently it was adjudged the Best Documentary at the Trinidad & Tobago Film Festival.

Filmed and directed locally by the unmistakably gifted young film aficionado Gabrielle Blackwood, the mortal eyes see the reality of an amputated leg but the immortal third eye witnesses an unbroken body and spirit that transcend stereotyped perceptions and some cultural inanities.

Blackwood captures this athlete’s humanity by delving into the personal daily life of Williamson with mature sensitivity, allowing the subject to give viewers and listeners a deep verbal perspective of a life lived with emotion arising from adverse social circumstances and economic insecurity, yet with confidence in his abilities to overcome.

Williamson, on viewing the film for the first time, said: “This was a truly awesome moment for me, not only seeing myself on film, but being able to send a positive message to all persons who are disabled. As I said in the film, I don’t see myself as disabled, as I can do anything.”

Williamson in the film discloses that Christopher Samuda, the president of the Jamaica Paralympic Association (JPA) and the Jamaica Olympic Association (JOA), met and “discovered” him on one of his (Williamson’s) routine walks to work one day and there Samuda encouraged him to take up a para sport, subsequently introducing him to the sport of rowing.

His destination, which has become his destiny, was Caribbean Maritime University where he came and is still under the tutelage of Robert Scott, a director of the JOA and secretary general of the Jamaica Rowing Federation (JRF), who he continues to be inspired by.

Scott said: “Seeing this film happen was an emotional moment for me as his coach. I have seen first-hand the challenges he faces, challenges that have stopped others from continuing to train, but everything he does with a smile.”

The film’s director, Blackwood, was highly commended by Scott: “Gabrielle was the consummate professional. She captured not only the rowing but Laron’s soul. It is my wish for this documentary to be seen by every differently abled person in the Caribbean.”

For Blackwood the film’s destiny is still in the making: “I’ll just keep trying to get people to see it so that they can appreciate and share in Laron’s story. The film is in the public domain now but we’ll see if it can tour a few more festivals.”

The film is just not simply a visual biography which evokes contemplation of the mettle of the human spirit but it is a riveting dossier on how to triumph and why you should triumph.

Blackwood gives us a potpourri of light and dark, introspection and extrospection in synthesising Williamson’s life and his love for the sea, which enables him to ‘paddle his own canoe’ with admirable self-confidence and acquired expertise.

JPA and JOA boss Samuda said in reflection after viewing the documentary: “ Unbroken is for me a liturgy of faith in oneself to overcome despite adverse circumstances, and is a testimony to the indomitable spirit of man that gains quintessential expression in Laron’s conquest on the sea — his triumph as an able rower.”

Paradoxically, Williamson did not meet the physical/medical requirements set by the International Paralympic Committee (IPC), the world governing body for para sports, to qualify as a para athlete. Disappointed but certainly not defeated, Williamson is now utilising his abilities to compete with able-bodied rowers and, in the wake of his successes, has achieved certification as a Level Two rowing coach from the Fédération Internationale des Sociétés d’Aviron (FISA) or the International Rowing Federation, the governing body for international rowing. A valued member of the Jamaica Rowing Federation, Williamson continues to make waves.

Samuda gives a redemptive perspective when he said: “Laron is an exemplar of hope for a society that must look at itself and the world through the lens of the camera, without prejudice, in creating a vision and reality of equality and accord.”