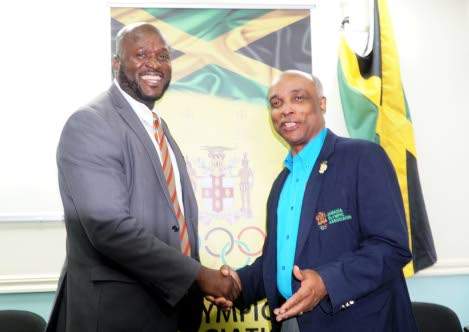 Another sporting federation was added to the list of Olympic sports in Jamaica with the launch of the Jamaica Weightlifting Federation (JWF) at the offices of the Jamaica Olympic Association (JOA) on Tuesday.

The JWF was duly registered with the Companies Office of Jamaica on May 2, 2018. Thereafter it was duly recognised and accepted as a member association of the International Weightlifting Federation in November 2019.

The formation of the current JWF was created from the initiative of the JOA to widen and develop the number of sporting opportunities available to Jamaicans.

President of the association, Dr Mark Bromfield, spoke of the need for the formation of this association.

“It is very important because there are many Jamaicans, both on the island and in the Diaspora, who would have represented us if we had a federation [before]; this now gives us a platform. There are a number of athletes spread right across the country and right across the world who are interested in representing us.”

Dr Bromfield was hopeful that the nation will be represented at the Olympic Games in Paris in 2024.

“When we go to the next Olympics [in Paris] hopefully we will be represented in another sport apart from track and field.”

Components of the strategic plan of the JWF were divulged to the public at the launch, which include;

1 Establishing training centres/gyms, high-performance centres and franchises under the auspices of JWF in promoting and facilitating, among other things, excellence in weightlifting

3 Hosting and participating in championships at the national, regional and international levels.

President of the JOA Christopher Samuda expressed confidence in the executive of the federation in being able to make the sport of weightlifting a fan favourite in Jamaica in the near future.

“With any minor sport which doesn’t have the mass following there will be challenges, but I am sure that they will have a very strong and robust marketing plan that will endear the public to the sport. It is a sport that has gone unannounced for a long time but I am sure that President Bromfield is going to ensure that it comes to the public eye.”

Samuda also indicated he was pleased that more young Jamaicans would have another sporting option from which to choose.

“Certainly the Jamaica Olympic Association supports what people perceive to be non-traditional sports and we want to give our young people a myriad of options — and this is one sport that I am sure they will be able to embrace.”

CEO of the JOA Ryan Foster expressed delight at being a part of the launch of yet another federation since his arrival.

“The Jamaica Olympic Association is delighted to be present at this the launch of the Jamaica Weightlifting Federation. This mission of the Olympic movement is to encourage the regular practice of sport for all people.

“For us as a movement, your gender, age, location, social background and economic status are immaterial. Sport of varied types should be accessible to all people,” he said.

Soneil Ellington, who has been training for three years in anticipation of the formation of the federation, could not hide his excitement at the opportunity now presented to represent Jamaica in an Olympic sport.

“It is a good thing that the federation has been launched; I have been looking forward to it for a very long time. Having a federation helps us tremendously because it provides the support that we all need to go forward with the future of this sport. It’s a lovely day, it’s a momentous day, it’s a good day for sport in general.”