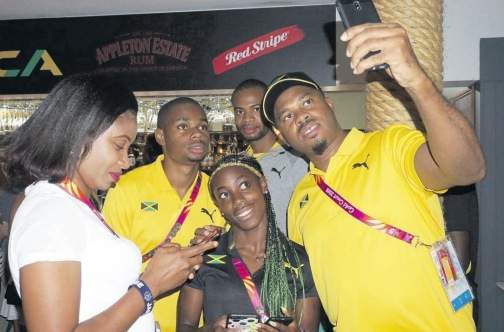 Jamaican athletes and administrators pause for a selfie moment at the Helm Bistro in Australia. 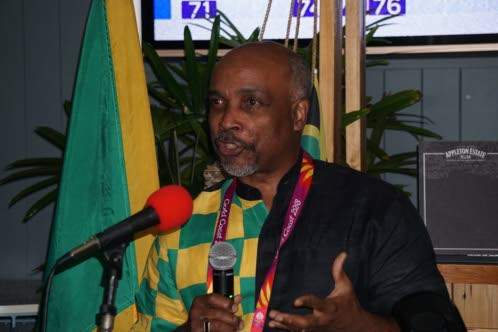 These achievements in the middle-distance and field events have certainly heralded a new paradigm in Jamaica’s athletics programme, indicating that the country is more than just a sprint factory. The performances of those athletes along with Traves Smikle (silver in the discus) and Natoya Goule (bronze in the 800m) will certainly inspire a new generation of young Jamaican athletes to pursue areas of the sport other than sprinting as the country broaden its reach on the global stage.

The retirement of Usain Bolt has left many in a quandary about the future of Jamaican athletics, but at the very first opportunity, since Bolt hung up his spikes, a new generation has begun to answer the question of who will be next.

Also of significance at the Commonwealth Games was the success of the Commonwealth Manor. A series of events was hosted by the Jamaica Olympic Association (JOA) at the Helm Bistro and the Vibe Hotel, which brought together a mix of Caribbean and Australian heads of sporting organisations and business interests as well as ordinary locals for a mix of business and pleasure.

JOA President Christopher Samuda was convinced that the objectives set out for Australia were fully met during the Commonwealth Games.

The venue was also used as a place for working lunches, even by the executive of the JOA on occasions.

The series of lectures that were hosted by the JOA also left a lasting impression, as it showed clearly the thinking path of the association’s leadership and its intentions over the next few years — to move sports from where it currently sits to becoming the business of sports.

“What we are trying to establish is that Jamaica is a thought leader in dialogue in sport, and I think this was a very good start,” Samuda said of the various fora that were hosted.

“We indicated to the other countries that what we have to do is, before we get into the performance of sport, we have to understand the rationale of it and that rationale comes in discussions and fora such as the one that we had put on.

“So we (Jamaica) are going for thought leaders in sport, to ensure that we make a meaningful contribution to the international dialogue; and if you look in the past years, we really have not been impressionable at the international stage in terms of policymaking and in terms of thought leadership. So this is just one way to put us on the map and to indicate that we have the credentials to contribute to the world dialogue,” the president explained.

“We are going beyond just being participants because we have, in many respects, mastered that. What we have to do now is to establish ourselves as thought leaders and lend to the global dialogue on sport, because there are several issues that lend to our intervention and in respect of which we have experience to make a worthwhile contribution and what we are saying is: use Jamaica as a reference point, as a text and also as a context for your discussion,” Samuda suggested.

Coming out of hosting the events, the Helm has added Jamaican cuisine to its regular menu, indicating the huge impression that the food has made on the Australian palate after only two weeks.

Left with an indelible mark, Australia will not soon forget Jamaica as the country will remain long in their memories for its sport, culture, music, and cuisine.