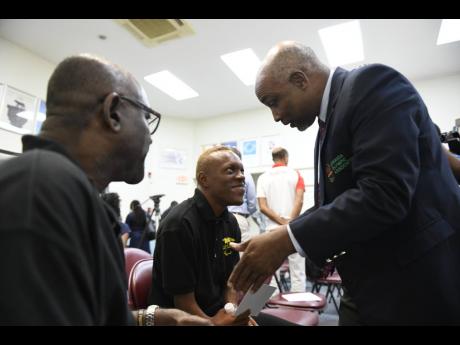 Those entrusted with the development of para athletes have been challenged to continue unearthing potential for the sporting individuals and national good.

Christopher Samuda, president of the Jamaica Paralympic Association (JPA), made the call amid Jamaica’s historic qualification for the sport of tae kwon do, during a press conference at Olympic Manor on Wednesday, announcing Jamaica’s nine-member team to the 2019 Lima Para PanAmerican Games, which runs from Friday, August 23 to Sunday, September 1, in Peru.

“The Paralympic flame is burning for we have moved from our flagship track and field sport into tae kwon do, in which we will have for the first time representation at the Para Panamerican Games and indeed at an international game,” said Samuda.

“The Paralympic flame burns and will continue to burn at Lima and beyond and those of us who today have the responsibility to ensure that it continues to burn must take a petal from the cauldron and create, give birth to another flame,” Samuda implored.

He added: “By doing so we are creating the next generation of successful athletes and administrators, we are creating legacies which are fundamental to sport and community development.”

Shauna Kay Hines, who will participate in the 58kg., K44 Class tae kwon do competition, holds that distinction.

Landmark Achievements
As the JPA continues to spread its horizons, in terms of sporting disciplines, Samuda, who is also president of the country’s apex sporting body, the Jamaica Olympic Association, predicted other landmark achievements are forthcoming.

“We have moved similarly into judo where we will again make history in being represented in a regional game and on the international stage. We moved into the sport of fencing, table tennis, badminton and will be going in earnest into sitting volleyball and para shooting. The flame is burning,” the JPA president warned.

“And this is not by coincidence for we are here to serve and create opportunities and to provide options for aspiring men and women and aspiring youth,” continued Samuda. “We are here by choice in creating titles for our sportsmen and women and not for entitlements for ourselves.”

Jamaica’s team is due to depart on Friday, August 16 and will be involved in camp and classification exercises from Monday, August 19 to Thursday, August 22. The team is due for return on Monday, September 2.