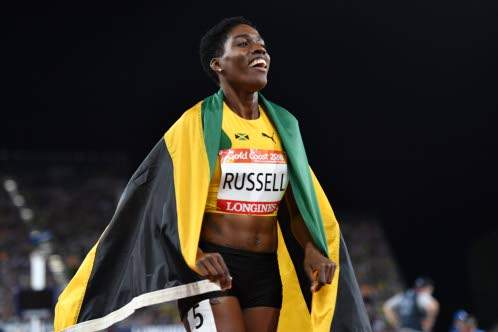 The Jamaica Olympic Association (JOA), through its CEO Ryan Foster and President Christopher Samuda, on Tuesday night hailed the performances of Jamaica’s athletes at the 21st staging of the Commonwealth Games on the Gold Coast of Australia.

Minster of Sport Olivia “Babsy” Grange also seized the opportunity to salute the athletes for a job well done.

Speaking at a welcome reception in the VIP Lounge at the Norman Manley International Airport on the return of the remaining members of the contingent, all three spoke glowingly of the performances of Jamaica’s largest contingent ever to the games.

Samuda, who was front and centre at the games leading the cheers for Jamaica’s athletes, said the success was a personal joy for him, but more importantly, it’s a manifestation of the vision of the JOA.

“It gives me great pleasure to announce that, yet again, Jamaica has been successful at yet another games,” he said.

The JOA boss thanked a number of individuals involved in Jamaica’s success at the games, beginning with his executive who all played their role in making things work seamlessly from behind the scenes.

“They have grasped the vision that we have articulated before ,and that is Jamaica must at all times exercise its right to athletic prowess.

“I would like to thank the captains of the team, Jhaniele Fowler-Reid and Fedrick Dacres. Both captains played their part honourably… they led by example. Dacres got his gold and Fowler-Reid led by example on the (netball) court in us getting the bronze medal.

For the first time at the games, Jamaica hosted the ‘Commonwealth Games Manor’ which was a tremendous success.

“I would like to thank Robert Scott in particular, who organised the Commonwealth Games Manor which was a hub for camaraderie and friendship. The music was so infectious and accentuated the Jamaican brand, and the manor also dealt very humanely with how sport should be delivered on the international stage. People came and enjoyed the music and enjoyed the festivity,” Samuda said.

Without breaking stride, the newly elected JOA head noted that attention must now turn to the CAC Games that will be staged between July and August in Colombia, and the World Youth Olympics in October in Argentina later this year.

CEO Foster said that the performances in Australia should be taken as a signal of even greater things to come.

“The Jamaica Olympic Association is proud of the performance of the Jamaican contingent to the 2018 Commonwealth Games in the Gold Coast, Australia. The 2018 Commonwealth Games had the largest contingent sent by Jamaica with the country being represented in 15 disciplines. It was the first time that the country was being represented in rugby, lawn bowls and female basketball.

Foster also took time to single out a few special performances at the games.

“Special mention must be given to the performances of Danniel Thomas-Dodd, Fedrick Dacres, Janieve Russell, Aisha Praught-Leer, Chris Binnie, the Sunshine Girls, and last but surely not least, our Paralympian Tevaughn Thomas who won the bronze medal in the Men’s T47 100m final. We are on a trajectory of greater things and the JOA will continue to play our part in facilitating sport development in Jamaica,” he said.

Grange, who described herself as a “proud minster”, was also full of praise for the athletes who performed in the various disciplines.

“I have nothing but praise for the Jamaica team. In fact, I am a very proud minister. To see that we came home with, 27 medals and certainly the diversity in the sports disciplines our participation speaks volumes to what we can achieve. As Jamaicans we can achieve anything we set our minds to.

Performances in the field and middle-distance events, along with netball, were also highlighted by the minister.

“We must take notice of how well Jamaica did in the field events as well, which is a mark of the overall progress that we have been making in track and field,” Grange noted.