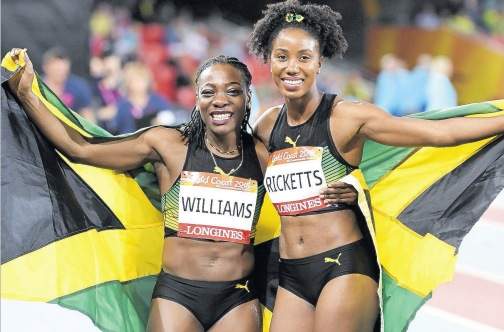 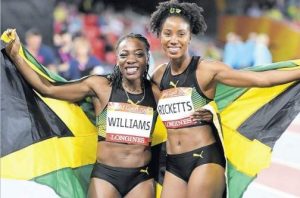 Gold Coast , Australia — Kimberly Williams and Shanieka Ricketts created history on Tuesday night when they became the first pair of Jamaican female triple jumpers to win gold and silver at the Commonwealth Games.

Ricketts had a season’s best 14.52m on her first jump which proved to be enough to get her on the podium, while it took a personal best effort from Williams of 14.64m on her last attempt to displace her teammate and snatch the gold medal after trailing in second place for most of the competition.

On a cool and wet night inside the Carrara Stadium on the Gold Coast the ladies soared to great heights and lengths to bring joy to the small number of Jamaican fans inside the stadium and the millions of Jamaican fans watching on television around the world.

They both controlled the event from start to finish, with a Jamaican being atop the leader board all the way.

Feeding off of the energy of each other at the beginning of the competition, the ladies were given more motivation when the pair of Ronald Levy and Hansle Parchment won gold and silver in the 110m hurdles final on the other side of the stadium.

Ricketts held pole position for five of the six rounds of jumping before her more experienced teammate produced the jump of her life to edge in front and ultimately snatch the gold.

The gold medal winner said that she had to contain her own excitement at the start of the competition in order to give herself a real chance at medalling.

“From the get-go I was jumping well. My first jump was a foul, so I had to calm down a little bit and just try and get a safe jump in. Once I had a safe one in then I knew I was in the top eight, then it was time to compete,” she explained.

Williams said she knew what she had to do in order to get the gold after the brilliant first jump that Ricketts had put down.

“Shanieka had already put a good jump out there, so I knew in order to win I needed to hit a PB (personal best). I am so happy it came on the last jump, because it shows that I can rise to the occasion and handle things.”

Despite finishing second, Ricketts was happy with the overall result at the end of the competition.

“I am happy because my first jump was 14.52, a season best, so I can’t complain about that. Kimberly PR’d on her final jump to beat me out of the gold medal and she is my teammate so I can’t be upset.”

She also hailed her own performance over what she had done four years ago.

“The last Commonwealth Games I finished fourth, I am second here, so that’s a lot of improvement. I am just grateful that I can be on the podium tonight.”

She admitted to finding inspiration from the performance of the hurdlers on the night.

“I am just happy that we were able to come out and get 1-2, the highest place that we could possibly finish. To see Hansle and Ronald finish 1-2, then we get another quinella for Jamaica, I know Jamaica must be happy right now,” she beamed.

Williams, too, admitted to the positive effects of the 110m hurdlers.

“I am happy, shout out to the hurdlers because I think the 1-2 that they did really motivated us to get it together, and we did that. Hopefully we can do the same in the 400m.”

She is also sure that the other members of the Jamaican contingent will feed off of Tuesday night’s performances.

“I know they will be highly motivated and they will handle the business when it’s their time,” she concluded.

Ronald Levy and Hansle Parchment were gold and silver medal winners, respectively, in the first final contested on the night.