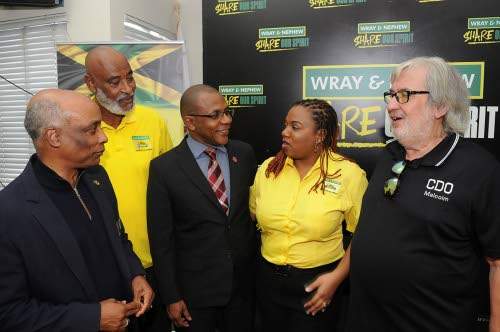 Jamaica will host the 2020 Caribbean and Americas Cup Darts Tournament July 17-27 dubbed the ‘Blazing Darts in Kingston’, it was announced at a media launch at the offices of the Jamaica Olympic Association on Tuesday.

The event, sponsored by J Wray & Nephew, will see 14 countries and the state of Florida competing inside the National Indoor Sports Centre for top honours.

Approximately 300 participants will be vying in the team events — triples, doubles, mixed, single and youth events, both in male and female categories.

Jamaica will be competing alongside The Bahamas, Barbados, Belize, Brazil, British Virgin Islands, Cayman Islands, Guyana, Florida, St Lucia, Trinidad and Tobago, and Turks and Caicos for the Caribbean title.

Canada and the United States of America (USA) will join the Caribbean islands in the Americas Cup. The state of Florida will not be a part of this tournament. However, there is interest from founding Caribbean member Bermuda to participate and Latin American giants Mexico.

Winston Ferguson, president of Jamaica Darts Association, was extremely happy that Jamaica will be hosting the tournament once again. The country last hosted in 1991.

“This is the high point of my career. I heard about the glory days and I said to my ‘team, we have to bring darts back to Jamaica’. It’s not easy, it’s a whole heap of work,” he told the Jamaica Observer

“People wonder why you want to do so much work, but this is part of being a patriotic Jamaican to highlight Jamaica, to showcase Jamaica and our talent,” said Ferguson.

“Dart is an interesting game, and if you are to watch a European game, you would have 10,000 watching a dart match because they learn the sport; if you learn a little bit about the sport, then you would appreciate it,” added Ferguson.

Plans are afoot to get the Jamaican public interested and come out in their numbers for the tournament with a series of competitions across the country.

Ferguson has no doubt Jamaica will lift the cup this year at home.

“The male team is on point and the female team is a little challenge, but they used to carry darts to the podium. We are working on it and I believe we have a good chance. I am confident that we should win the cup,” said Ferguson.

Nadia Kiffen-Green, J Wray & Nephew’s marketing manager, noted that this is not her organisation’s first year sponsoring darts, but certainly at the Caribbean level.

“Part of our association with the Jamaica Darts Association is the fact that as a brand, Wray & Nephew is seen as the spirit of Jamaica and we strongly believe in the development of Jamaica,” she told the Observer.

“You would have seen through our investments over the last two years where we would have invested in what we think are passion points for Jamaicans that don’t necessarily get us much love on investments,” she noted.

In 2010, Jamaica was earmarked to host the tournament, but after inspection by the ruling regional body, the tournament was shifted to The Bahamas.

Malcolm Spicer, president of the World Darts Federation, Americas Region, was at the launch of the event and said he was more than satisfied with the preparations.

“My job is to come ahead of time and make sure everything is sorted out and all little details taken care of. I was slightly concerned about coming here this time because the last time Jamaica won the bid in 2010 they had to decline six months before the tournament,” he pointed out.

“Having got here and seen the organisation and the support I am extremely pleased,” Spicer said to loud applause.