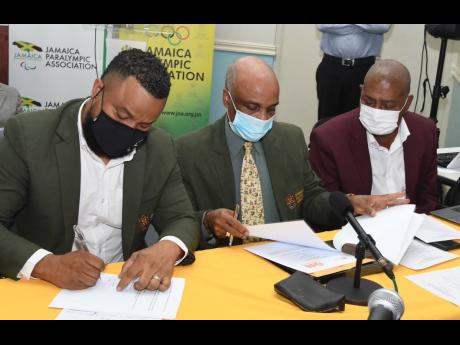 The Jamaica Olympic Association (JOA) has signed a Memorandum of Strategic Alliance with World Eleven Incorporated and Argentina Football Association (AFA) with the goal of exploiting advantages offered by the AFA’s Technology Institute and developing football in Jamaica.

A first between World Eleven and a Caribbean country, the memorandum of understanding, in the first instalment, will last for 10 years.

Because of the COVID-19 pandemic, all parties to the agreement were not present in the same ceremonial spaces – the JOA’s Olympic Manor headquarters in Kingston and the AFA in Argentina. This meant the signing, streamed live from both locations, was effected under unique circumstances with pre-signed documentation uploaded to both parties, who counter-signed simultaneously to signal a done deal.

The purpose of the memorandum is to create a strategic alliance between the parties with a view to creating and marketing the AFA Technology Institute throughout Jamaica to develop and matriculate footballing talent in Jamaica and transitioning same to the international stages of the Olympic Games and FIFA World Cup.

“The JOA consciously understands this culture of success which impels us to establish enabling partnerships and which has led us, with the facilitation of the ambassador (Argentina), to World Eleven, an experienced Argentine football outfit engaged in the business of exporting the AFA football technology, which marries the teaching of practical and technical skills with a customised software that hosts e-learning, evolution, and coach-grading methodologies,” Samuda said.

“We have to transition the game to a level where physical analytics, physical kinetics, long-term athlete development concepts, and technical learning become the basis on which talent is developed, sustained, and matriculated,” he added.

“So as the JOA looks in earnest on a historic qualification of our male and female teams at the 2024 Paris Olympic Games, the 11 men and women on the field of play at the Olympiad and the World Cup must be products of a transformed education programme driven by technical, scientific, and technological methodologies.”