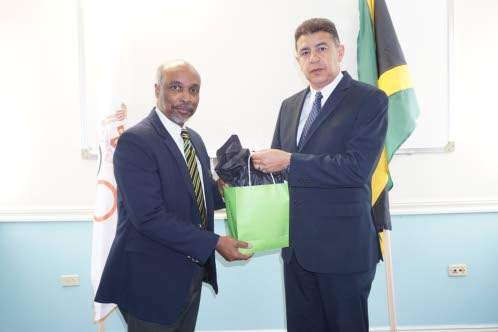 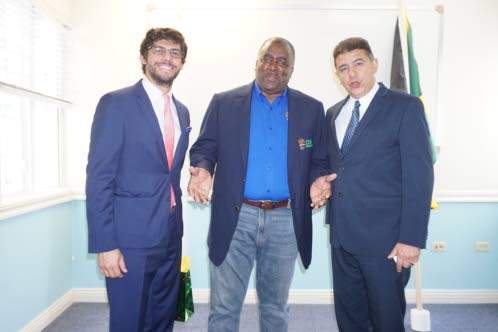 President of the Jamaica Olympic Association Christopher Samuda (left) presents a gift to the Colombian Ambassador to Jamaica Roberto Garcia Marquez after a meeting where it was agreed that a memorandum of understanding would be entered into in short order. (Photos: Dwayne Richards)

With the most successful Commonwealth Games achieved by way of number of medals gained in Australia last month, the Jamaica Olympic Association is not resting on its laurels as an organisation.

The next big event on the agenda is the Central American and Caribbean (CAC) Games in Barranquilla, Colombia, starting late July and plans are already afoot to ensure that those games are also a tremendous success.

Though not the only thing on the agenda, the CAC Games was one of the main topics of discussion when the Colombian Ambassador to Jamaica Roberto Garcia Marquez made a courtesy call on the President of the JOA Christopher Samuda and his board members on Wednesday at their Cunningham Avenue office.

At the end of the discussions, a delighted Marquez explained the reason for his visit with the JOA president.

“It was a courtesy call on the president and his board in order to build a win-win situation for the upcoming events. One, especially for Colombia is the Sports Diplomacy group that is coming next month. This is the eighth version of the programme that already got an international prize called Peace and Sport and we would like to increase the outcome of that programme,” he stated.

The ambassador is ready to play host to the Jamaican athletes who will be participating at the Games, even before they leave the island for the South American continent.

“The other very important event is the Caribbean regional games, the CAC Games, that will be held in Barranquilla and we would like to do a farewell for the group of athletes from Jamaica and to see if we can build a stronger relationship in terms of sports between Colombia and Jamaica, not only in track and field, but maybe also in soccer in order to demonstrate that the Caribbean is the most powerful region in sports in the world.

“Colombia nowadays has very good soccer players and hopefully in the World Cup we will do well in Russia,” he added, referencing the performance of James Rodriqiuez who scored for Bayern Munich against his parent club Real Madrid in the semi-finals of the UEFA Champions League on Tuesday.

Samuda, meantime, said that the first meeting formed part of the protocol as the JOA moves full speed ahead with its plans to grow sports in the country.

“It’s part of the objective of the Jamaica Olympic Association to build partnerships with our National Olympic colleagues globally and the protocols indicate that we first have a meeting with the resident ambassador because once we are in dialogue with our National Olympic Committees (NOCs) then the protocols will indicate that we also have to bring the Colombian ambassador into the mix of things,” he explained.

According to Samuda, partnerships and leveraging Jamaica’s assets form part of the plans going forward.

“So this meeting was strategic because we are going to Barranquilla for the Central American and Caribbean Games (CAC Games). It is also a part of the general thrust of the JOA to build partnerships across borders and what we are hoping to do is to leverage the value that we have in order to get assistance in other areas.

While the CAC Games is the obvious drawing card, Samuda intends to create a long-lasting relationship that will go beyond August.

“We will not only be dealing with the CAC Games, but we will be dealing with a relationship beyond that and we hope that we will be able to codify that relationship in an MOU, a partnership agreement that will see the technical exchange of expertise between Jamaica and Colombia as well as culture because sports is entertainment so what we are hoping to do is to have that in place so that we will facilitate the transfer of knowledge,” he noted.

Samuda also made it known that the agreement with Colombia will be the first in a series that he hopes to get done as part of the overall growth strategy of the JOA.

The CAC Games in Barranquilla will be held from July 19 to August 3.