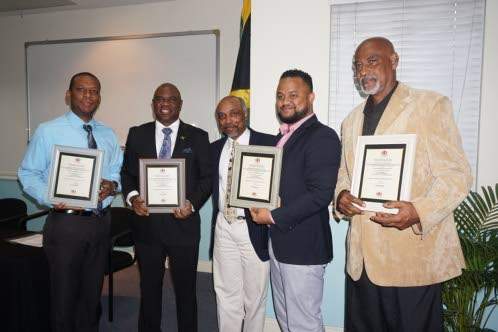 President of the Jamaica Olympic Association Christopher Samuda (centre) poses with presidents of the four newly inducted sports to the JOA. They are (from left) Lyndon Latore, president of hand ball; Ian Wilkinson, president of chess; Ryan Foster, president of skateboarding and Winston Ferguson, president of darts after a brief ceremony welcoming them into the JOA recently. (Photo: Dwayne Richards)

The official membership of the Jamaica Olympic Association (JOA) swelled to 41 after four new sports were inducted into the organisation on Friday at the Olympic Manor at 9 Cunningham Avenue in Kingston.

The four new sports were chess, darts, handball and skateboarding.

In a brief ceremony that was attended by members of the diplomatic corps, four proud presidents received certificates which indicated their official arrival into the JOA.

Ian Wilkinson, QC, received for chess, Winston Ferguson for darts, Lyndon Latore for handball and Ryan Foster, who is also the CEO of the JOA, received for skateboarding.

President of the JOA Christopher Samuda presented the certificates of membership to the four presidents at the ceremony; after which he provided the official welcoming address.

“The Jamaica Olympic Association is pleased to welcome to our fold four new members, and we at the JOA are always emphasising sport development.

“The only way that we can effect sport development is to ensure that we have structured representation and that the umbrella organisation can impact the lives of member associations in a very formal and very efficient way so as to achieve the success that we all desire. The admission of our new members satisfies this objective,” said Samuda.
He also indicated that not all sports that are members of the JOA are Olympic sports.

“More importantly, the Jamaica Olympic Association’s reach is just not simply members of the Olympic family, we have in our association entities that are not Olympic sports, but we fervently believe that we must develop any endeavor that we call sport in the interest of humanity and in the interest, particularly, of our young people,” noted Samuda.

Ian Wilkinson spoke of the significance of chess on a global level and the role Jamaica plays in the region.

“This is a tremendous day, not just for the Jamaica Chess Federation, the chess fraternity, the executive council and the wider membership, but this is a great day for Jamaica’s sporting history,” said the attorney-at-law.

Latore believes that being inducted will give a significant boost to handball.

“I definitely believe that being inducted into the Olympic movement will help to raise the profile of handball in Jamaica. People continue to ask the question all the time, what is handball?” he said.