Jamaican women in sports vow to keep on fighting for right of place, respect 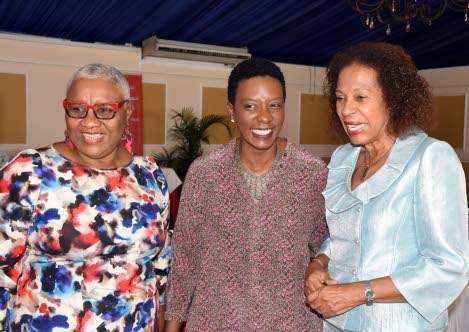 If Jamaica’s young female sports aspirants required an extra push to keep them going in a male-dominated world, then they would have received it at the inaugural Women in Sports Conference at Terra Nova All Suite Hotel on Wednesday.

The event, hosted by Yardie Sports CEO Dwayne Richards, brought together a number of influential women in one room to highlight their contribution to various industries, particularly in the sporting arena.

In most cases, when it comes to engaging women in sports, football in particular, many often lack interest based on the fact that it is a male-dominated sport.

But that has been gradually changing, as women both locally and abroad, have deepened their efforts for inclusion and continue to champion the cause for change.

As such, the women at the conference, not only shared their success stories – some as athletes, others as sports administrators or both – but also encouraged younger females to keep charting the course towards their dreams, despite the gender-biased hurdle.

Themed ‘Women born for sports’, student-athletes from Wolmer’s Girls’, Immaculate Conception, Papine High, and The University of the West Indies (UWI), could not help but be stimulated by the presentations of top administrators Marva Bernard and Lorna Bell, as well as retired Olympians Sherone Simpson and Sanya Richards-Ross, who shared via video.

Molly Rhone, president of International Netball Federation from 2003-2019, and Vilma Charlton, 1964, 1968 and 1972 Olympian (athletics)/JAAA vice-president were honoured for their contribution to the sport of netball and track and field, respectively.

Bernard, president of the Americas Federation of Netball Associations, spoke about transparency in leadership, which was, and still is, her mantra as an administrator.

During her 10 years as president of Netball Jamaica, Bernard led with dignity and selflessness, which inspired Jamaica’s Sunshine Girls to a number of worthy performances at major tournaments, as they maintained their rank as one of the top-four nations in the world.

Jamaica’s Special Olympics teams have delivered several medals at the Games, many of them gold.

In her presentation, Bell, who was the first female general secretary of the Jamaica Football Federation (JFF), pointed out that her participation in the conference was a no-brainer.

Bell, the wife of the late football aficionado Jackie Bell, shared that during her time with the then Captain Horace Burrell-led JFF administration, she was integral to the Reggae Boyz 1998 World Cup qualification. But despite the results, she was confronted by critics who were concerned about a woman operating in a “so-called man’s world”.

“In a world heavily skewed to favour males, it can sometimes be hard for women to believe in themselves, or to truly appreciate the female strength that makes us special and amazing. This is especially true in the area of sports administration.

“In order to address this, we must first acknowledge the gender equality gap in this important area, especially when it comes to top management positions. Too often, women are not judged by our performance, but rather because we are women,” Bell, a 30-year veteran administrator opined.

She continued: “The good news is that despite these challenges, a number of our Jamaican women have dedicated themselves to serve in various aspects of sports administration and I’m honoured to be sharing space with two of the most powerful women in sports, Marva Bernard and the honourable doctor Molly Rhone. They are among the women who are serving with professionalism and distinction and are making a difference where it matters most.

Meanwhile, Simpson, who spoke about the many obstacles she had to overcome on her way to winning a 100m silver medal at the 2008 Olympic Games, believes her story and that of Shelly-Ann Fraser-Pryce’s, among others, are testimonies of the strength and willpower of women.

Fraser-Pryce, who took a break from track and field to give birth to her son, Zyon, returned last year to become the oldest woman to win a 100 World or Olympic title in last year’s Doha World Championships final. She won in a fast time of 10.71 seconds to secure her fourth 100m World title and eighth world title overall.

“It goes to show how brilliant we are, even though the males get most of the spotlight. A lot of other females are breaking down the gender gap in sports — mixed martial arts, hockey players, and golfers — are bursting through the gate into sports dominated by males and showing they mean business.

“Still, they don’t draw the attention or money of their male counterparts. We as women fight hard for our recognition; we will continue to fight that good fight, until we are seen as equals to our male peers. We will continue to take up space and will not shy away from eating at the table because we know what we bring to the table,” Simpson reasoned.