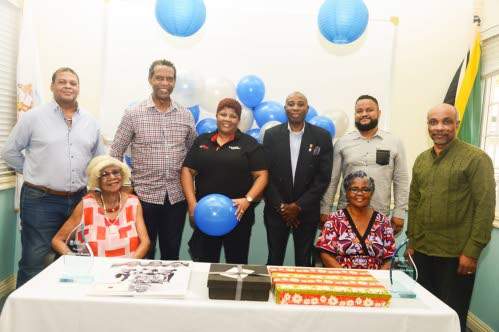 Glowing tributes were heaved on long-serving stalwarts of the Jamaica Olympic Association (JOA) Marjorie Brown and Gwendolyn Brown, as sports’s apex body in this country accorded due recognition for their magnanimous contribution to the organisation and Olympism.

Celebrations honouring the Browns, who have engraved a distinguished path in their combined 45-year tenure at the JOA, took place among a spirited throng in an atmosphere filled with an outpouring of appreciation and compassion on Friday evening at Olympic Manor, the JOA’s headquarters next door National Stadium in Kingston.

Plaques and gifts from both the association and its directors, along with packages that included health insurance for Marjorie Brown for the next two years, and financial benefits for both, were handed over to the women to hearty applause from the group, spaced in the now-accustomed manner due to COVID-19.

And, even though reggae sensation Koffee — a youthful artiste, distant in years from the ladies being honoured — was not in the house, the vibe of one of her hit singles, Gratitude is a Must, reverberated throughout and struck a beat with the honorees.

“I’m very grateful, we’re very thankful about it,” shared Marjorie Brown, who for 25 years handled much of the association’s administrative matters. “I didn’t make any response but I’m very elated, it was very pleasing. To see the amount of people who came, all the officers who came to wish us well. I’m very thankful and it has really lifted our spirits.”

Gwendolyn Brown, who served as office assistant for 20 years, was just as grateful.

“I thank them very much, very, very much. I didn’t expect it, I didn’t,” she chuckled. “I was shocked. For the presents and everything they gave me I’m thankful.”

Christopher Samuda, president of the JOA, lauded the Browns for their spirit of service, assuring them that their legacy is secure, and they will always be remembered.

Samuda said: “What we’re doing this evening is to celebrate two ladies who have not been only the face of the institution for years, but who have given selfless service to the Jamaica Olympic Association.

Samuda listed their attitude as most important.

“So we’re grateful to them, we appreciate their service, but more importantly, we appreciate with which they expressed that service. Too often in this country we extol and we praise confidence and we, of course, in certain instances, we accept it. But certainly from their perspective there was no confidence or bombastic in character. What they did is serve with humility, they serve with a sense of humanity and they served not counting the cost or looking for any praise or encomium,” said Samuda.

“It is not often that you see people giving over 20 years of their life towards a cause or something, but it is also not easy to do it with such professionalism, care and love over such a long period,” said Foster.