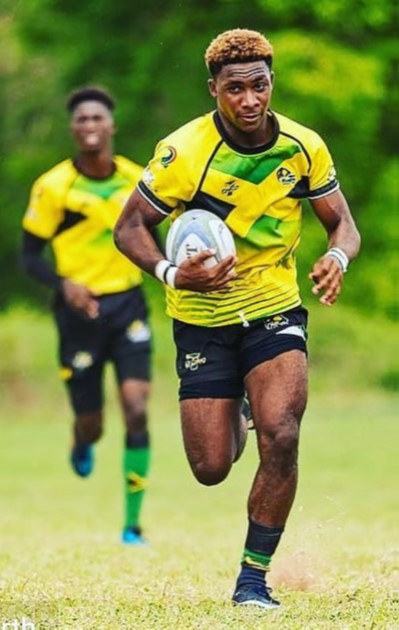 The Jamaica Rugby Football Union is proud to announce that Dylan Davis of the Mona Titans RFC will be representing Jamaica Crocs 7s for the first time as a senior when they travel to South America forthe World Challenger Series on February 11, 2020. The 17-year old flyer who is a product of Norman Manley High School and currently a student at the Caribbean Maritime University (CMU) will earn his spurs on the 12 day/2 tournament event in Chile and Uruguay, where he will be competing alongside fellow locals Mikel Facey and Oshane Edie.

“If you’re good enough, you’re old enough,” said Head Coach Steve Lewis who watched Davis starring for the dominant Mona Titans team which won the first 2 recent domestic 7s, and for Roots Rugby at the New York Sevens. “He is raw for sure, but his education has to start somewhere and this is a great opportunity for him to begin that process.” said Jerry Benzwick , Chairman of the Jamaica Rugby Football Union.

Jamaica have been drawn with Hong Kong, Papua New Guinea and Colombia in the first tournament to be held in Vina Del Mar, Chile on
February 15/16 before heading to Montevideo for Round 2 of the Challenger Series February 22/23. Stakes are high for the Crocs as the
top 8 finishers in the series will be featured in the Prestigious Hong Kong 7s qualifiers in April 2020.