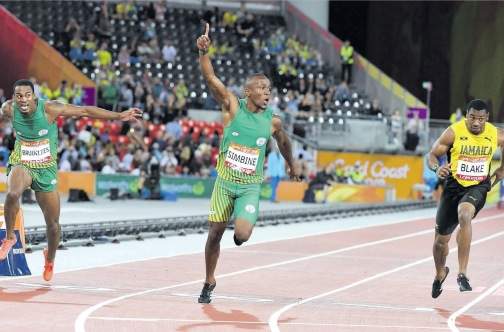 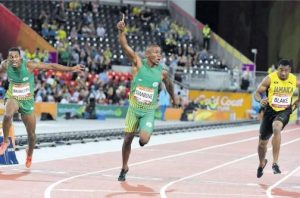 Gold Coast , Australia — The South African pair of Akani Simbine and Henricho Bruintjies tore up the script and rewrote the storylines as they upset odds-on favourite Yohan Blake of Jamaica in the final of the men’s 100m, at the Gold Coast Commonwealth Games Monday night.

However, before the Blake mishap from a Jamaican perspective, Gayon Evans surprised many inside the stadium when she snatched her first individual medal for Jamaica with a bronze-medal finish while running out of lane nine in the women’s 100m final.

Christania Williams, who was more fancied for a medal, took silver, with Michelle-Lee Ayhe of Trinidad and Tobago taking the gold medal in fine style. The other Jamaican in the race, Natasha Morrison, finished fifth.

With the whole world focused on Blake, who had seemed unbeatable after his performances in the heats and semi-finals, the very talented Simbine strode to a comfortable victory in 10.03 seconds, while his teammate rode on his coat-tails to snatch the silver medal in 10.17 seconds. Blake eventually made it across the line for third in 10.19 seconds.

The blue riband event was the last one on the Monday night schedule and a jam-packed stadium waited in anticipation to see the heir apparent to Usain Bolt lift the first title available since the retirement of the legend. But the sound of the gun saw Blake stumble out of his blocks while the quick reaction of Simbine saw the South African take immediate control of the race.

While Blake desperately tried to regain his balance Simbine pulled away from the field, with his teammate Bruintjies in tow. The 2011 World champion finished strongly, but not well enough to repair the damage that was done over the first 40-50 metres of the race. The one-handed, raised-arm celebration of the new Commonwealth champion spoke of the sheer joy experienced by the 24-year-old South African.

Blake said he found it impossible to recover in time from the stumble out of the blocks.

“I have been feeling great, I am still feeling great, but I was stumbling all the way through and I couldn’t recover from it. By the time I got up (and) running I just couldn’t catch the field as how I wanted to. I did get the bronze medal but I am a bit disappointed… I was supposed to take this very easily because I was running good. It was just never meant to be, I guess.”

He suggested also that overconfidence may have been his downfall.

“I was supposed to get it (gold medal) easily, but I suppose I was too confident and overthink it and I was trying too hard at the start and I was stumbling. Nevertheless, I give God thanks,” he explained.

The Jamaican got a huge ovation from the Australian crowd, something that was not lost on him.

“Australia is like a home away from home. They have been really good to me and I want to give lots of love to them for the support,” Blake said.

He added: “I wasn’t focused on him (Blake). I literally just focused on myself and making sure I get out fast and get to the 50m as quick as I can.”

Three individuals had been tipped for medals in the women’s race, Ahye, Williams and Asha Philip of England. Williams failed to get her usual lightning start and was left behind by the field. She clawed her way back into contention to get a medal with a time of 11.21 seconds. The heavy favourite Ayhe duly obliged with the gold in 11.14 seconds, but it took a lifetime best effort from Evans of 11.22 seconds to earn her spot on the podium. Philip was fourth in 11.28 seconds, while Morrison was clocked at 11.31 seconds for her fifth place.

Evans was over the moon with her podium finish.

“With no Shelly-Ann Fraser-Price, no Veronica Campbell Brown and no Elaine Thompson, for Jamaica to come out here and get two medals in the (100m) sprint I am really excited and happy,” she said.

She was also really happy with her efforts to claim her first senior medal for the country.

“It is really special to get a medal; it is my second senior meet. World Indoors I wasn’t able to run the semi-finals because I got an injury, but I was able to come out here and put a race together and get a bronze medal, and I am really happy.”

While others may not have been taking notice of the diminutive runner, she had been gearing up in her mind to pull off the upset that she eventually created.

“I feel good to run a new PB (personal best), but I know I have been putting in the work. I really wanted to go faster but I am really grateful; it’s a PB. I wasn’t counting myself out the medals because I know as long as you line up you have a chance. I know it was a good field out there but I was well focused and comfortable and I wanted this medal — and I did get it,” she exclaimed.

Williams was happy that she wasn’t the only Jamaican to medal on the night.

“It feels great. At least I won’t be alone on the podium tomorrow,” she joked.

For Williams, winning a medal on the night goes with her expectations coming into these Games.

“It is exactly what I was expecting, apart from not getting the gold, but I am happy. I was hoping for a better time and I wasn’t pleased last season, but it is pretty early (in the season). I still have more races coming up and I am just looking forward to those.”

While a lot of people do not put the same significance on the Commonwealth Games as the other major world track and field events, for Williams the chance to represent her country on any stage is always a special one.

“For me, every chance that I get to run, it means a lot to me because I don’t know when will be my last race — I just give it my all whenever I am on the track,” she stated.

Defending shot put champion O’Dayne Richards finished just outside the medals when his best throw of 20.80 medals proved good enough for only fourth place. He got his best effort with his second throw of the night, but failed to register a legal mark on the next four throws. He was poised for a bronze medal with the final round of throws to go but was edged out by Tim Nedow of Canada, who got his season’s best effort of 20.91m on his final throw of the evening.

World champion Tomas Walsh of New Zealand took the gold with a best effort of 21.41m, while Nigerian Chukwuebuka Enekwechi produced a personal best effort of 21.14m to take the silver medal. The other Jamaican in the final was Ashinia Miller who finished seventh overall with a best of 19.68m.

Three men will line up for the final of the 400m tonight (6:48 am Jamaica time) which will give the nation hope of an increase in the bounty in Australia.