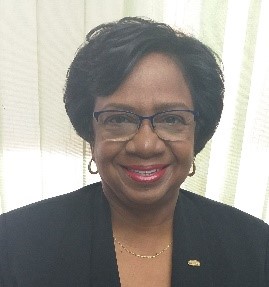 Jacqueline Cowan is an experienced sports administrator, who has held numerous positions. As a 28-year career banker, both locally and internationally, Mrs. Cowan main duties included: Business Development, preparing budgets and ensuring the attainment of financial targets. She also held the position of Senior Manager of Human Resources. she holds a BA Degree in Psychology,

• Former Chair of both the Women’s and Grassroots Committees – KSAFA

• Former Member of the JFF’s Board of Directors

• Tournament Director of the successful staging of the three (3) Beach Olympic Volleyball Qualifiers, and the Caribbean Under 19 Youth Boys Championship

• Chief Liaison Officer in the CFU U17 Girls Tournament in 2013, and was Manager of the Jamaican Team


• Responsibility for the organization of transportation of all teams, officials and
CONCACAF EXCO’s that participated in the CONCACAF Round of qualifying for U20 girls, Under 20 Boys, and the CFU Caribbean Cup (Seniors) – 2008-2014

• Wrote proposal to FIFA for Jamaica to receive funding for the National U15 Girls programme, which was consequently accepted in 2012

• In 2010, after a 20-year absence, re-introduced female football in Kingston and St. Andrew (KSAFA)

• Chef de Mission for the Jamaican team to the ParaAthletic World Championships – 2017
• Represented Jamaica at the “Leadership Forum for Women in Sports in the Americas” held in Peru - 2016
• Represented Jamaica at both the North America, Central America and Caribbean (NORCECA) Volleyball Congress and the Caribbean Zonal Volleyball (CAZOVA) Congress