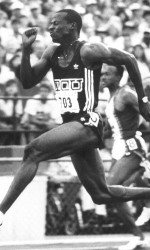 Raymond (“Ray”) Douglas Stewart (born 18 March 1965 in Kingston, Jamaica) is a former Jamaican athlete who specialised in the 100 metres event. As a junior athlete Stewart found much success at the CARIFTA Games, winning five gold medals within a four-year period. In 1984 he reached the 100 m Olympic final and won an Olympic silver medal for the 4×100 metres relay.

A new personal best of 9.97 seconds at the NCAA Outdoor Championships made him the number one ranked 100 m athlete in 1989 and the first Jamaican to officially break the 10-second barrier. At the competition he also recorded the third fastest relay time ever.