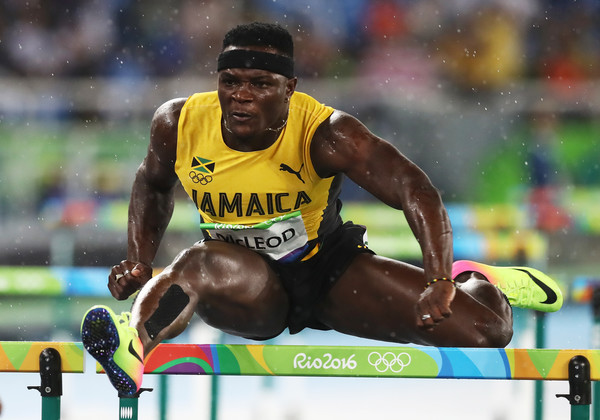 McLeod won the 110 m hurdles at the 2015 Jamaican Championships, defeating national record holder Hansle Parchment in a wind-legal 12.97 and breaking 13 seconds for the first time; the time was world-leading for a week.[14] He made his debut as a professional at the István Gyulai Memorial in Székesfehérvár on 7 July, but pulled up with a cramp and failed to finish.[15] At the start of the 2016 outdoor season, he ran 9.99 seconds for the 100 metres, becoming the first athlete to complete the 110 m hurdles in under 13 seconds and also break the 10-second barrier.[16] In the 2016 Rio Olympics, he won Gold in the 110m hurdles. Based on his outstanding athletic performance, Mcleod was recently crowned Jamaica's 2017 Sportsman of the Year. During 2017, he won six of seven 110m hurdles races, including the World Championships in London.

In 2013, his final year in high school, McLeod set Jamaican junior records in both the 110 m hurdles (13.24) and the 400 m hurdles (49.98) at the Boys and Girls Championships; he was the first Jamaican high schooler to break 50 seconds at the longer distance.[2] After graduating from Kingston College he went to the University of Arkansas on a track and field scholarship.[2]