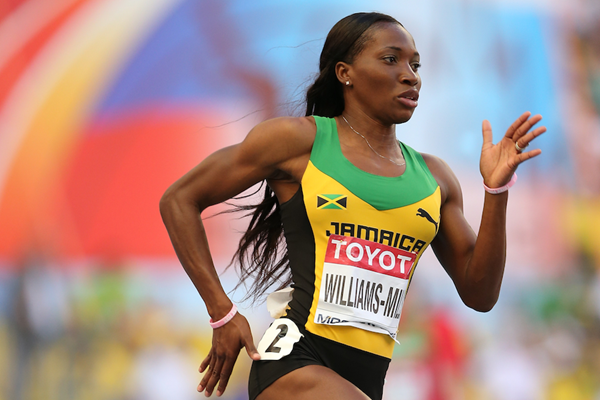 At the 2005 World Championships in Athletics, she won (together with Shericka Williams, Ronetta Smith and Lorraine Fenton) a silver medal. At the 2006 Commonwealth Games in Melbourne, Australia, she received a bronze medal for her third-place finish in the 400 metres.

At the 2012 Olympic games, Williams-Mills won a silver medal in the 4×400 meter relay. She also placed 5th in the individual 400 m event. Williams-Mills missed most of the 2013 season due to undergoing treatment for breast cancer.

During the 2014 season, Williams-Mills was very successful. Early in the season, she and three other Jamaican women won a silver medal in the 4 × 400 m relay at the 2014 world relays. Williams-Mills competed at the 2014 Commonwealth Games in Glasgow and won a silver medal in the individual 400 m and a gold in the 4 × 400 m relay, setting a games record in the latter. She was also successful at Diamond League meets, where she was crowned the 2014 Diamond League champion in the 400 m.

In 2015, Williams-Mills again won a silver medal at the world relays as part of the Jamaican 4 × 400 m team. At the 2015 World Championships in Athletics in Beijing, Williams-Mills finished sixth in the 400 m final involving four Jamaican women. In the relay, along with Christine Day, Shericka Jackson and Stephenie Ann McPherson, the individual 4th, 3rd and 5th placers, respectively, the Jamaican team won gold in front of the American favorites by just outsprinting them in the last 50 metres.

In 2016, Williams-Mills only competed in the relay at the 2016 Olympic games, running as the anchor leg for Jamaica trying to pass Allyson Felix of the USA, but during the final stretch Allyson manage to hold of Novelene to get gold the USA and unfortunately Jamaica got silver.

At the London 2017 World Championships, Williams-Mills made the final of the women’s 400 m and came in eighth place in a time of 51.49. In the 4 × 400 m relay, which was going to be her last major championship race, she was scheduled to anchor the Jamaican team; however, on the second leg, Anneisha McLaughlin-Wilby pulled up injured, therefore ending the Jamaican team’s chances of medalling in that event.